The ladies 2nd team were the first of Cardiff’s teams to take the field in the Womens Trophy competition.

The Cardiff & Met Ladies 2nd team approached the Welsh Trophy
Final following an extremely successful domestic season, winning 18 of their 20 league matches and securing the Division 1 title and promotion! The recent heatwave and nervous excitement could do nothing to prevent Cardiff & Met confirming their final victory of the season, as they overcame the travelling Bangor University 2-0 in front of a large crowd. Cardiff began with some exciting attacking play with Cardiff Met student Hope Stevenson and NAGS player Tegan Waters pulling strings in the midfield and creating a number of scoring chances. The deadlock was broken late in the first quarter with a well worked penalty corner. Abi Griffiths deflected home from close range to add another goal to her season tally! With the nerves settled, Cardiff proceeded to control much of the game with their strong defence, led by captain Nic Hatch, staving off any Bangor attacks at source. Another goal was added by Cardiff later in the third quarter. Following a strong carry down the right from Daisy Lowe, a skilful reverse chip over the diving goalkeeper by Sian Rosewarne was poached on the goal-line by 2nd team legend Rebecca Chidley to seal a deserved 2-0 win and the League-Trophy double! 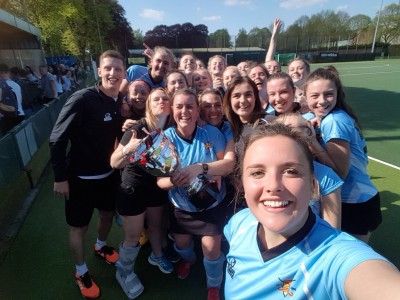 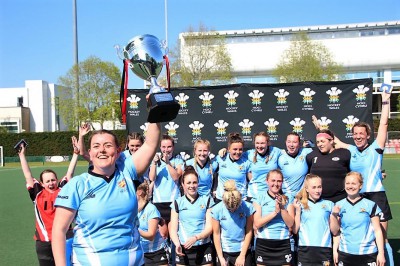 Eyes turned to the Mens teams as the sun rose on day 2 with the Mens E team first to take the field in the Mens Challenge Competition. Captain Mark Shelton, recounts the fixture as the Mens E competed in the final for the third consecutive season, arecord of 0-2.

“In the team huddle the team were determined to remedy this stat and make the beer taste sweeter later on. Tactics were discussed and it was agreed that the students would have speed and fitness on their side, so we would have to box clever and use all the experience within the team, with an average age the north side of forty.

Morgan set the tone for the day with a green after 3 minutes. Some say it was harsh but Sonny Bill would have been happy with the body contact in the tackle. A great move after 8 minutes saw John (bully) Ashton score a great goal, after fine work by Aron and Che.

Cardiff went two nil up after some rampaging asthmatic inspired run and cross from the ageing Captain, neatly finished by Sy Dovey. Inspired defending by Rhys and Lee, two important saves by Clevs, tireless midfield running by Sam, Morgs and John, made sure we held on to win 2- 0.

In the warm down after the game it was agreed that hockey was the true winner. Rhys got awarded MOM and unjustly, some would say, Shelts got DOD for a strong tackle with two minutes to go.”

Congratulations
to all involved: 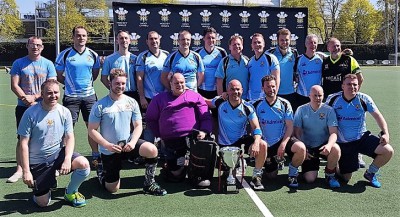 The last match of Hockey Wales finals day brought the return of a familiar Championship encounter between Cardiff & Met 1st and Whitchurch HC 1st in the Hockey Wales Mens Championship. Cardiff’s side secured 2nd in the Domestic National Conference West competition, while Whitchurch secured a mid-table finish in the Go Create Premiership.

While Whitchurch were in the midst of preparation for their Eurohockey Club Challenge II campaign in Slovenia, having recorded a strong finish to the league season, Cardiff saw the inclusion of Junior Internationals and the return of Senior Internationals from the Commonwealth Games. While the game remained competitive for long periods, the result was true to the league standings with Cardiff securing a 5-1 victory over cross-city neighbours. An early goal by Junior International Rhys Bradshaw set the tone, later followed by a further goal from Rhys, and goals Charlie Hunte, Ronan Taggart and Ieuan Davies.

Man of the Match – Jacob Draper

“I have always felt it is hugely important as a coach, and as a club, that we safeguard the integrity of our domestic competitions in order to grow the game and inspire juniors to want to play in these finals. This is reflected by the strength of team I selected and how seriously we take winning competitions to develop momentum and confidence. This group of athletes have worked really hard all season and it is great for the group and the club to finish on such a high. It’s an honour and a privilege that this group are the top ranked team in Wales.” 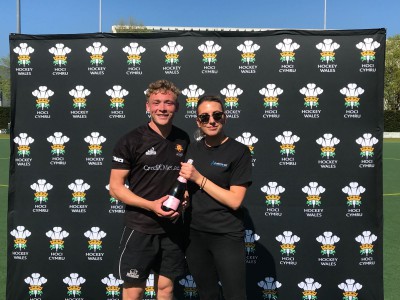